Note: In July, I always post about this bicycle race happening in France because of the valuable leadership lesson it teaches.

Look at the picture above. Who is winning the race? You might think it is the person in front.  Nope, not in this race.

The leader of the Tour de France is always the guy in the yellow jersey. The cyclist who has completed the previous stages of the race in the least amount of time is required to wear the yellow jersey. As you can imagine, this jersey is the most sought-after jersey in all of cycle racing.

What Does Yellow Have to Do With Me?

Why yellow? The yellow jersey, or the maillot jaune in French, was first awarded in 1919 to make the race leader stand out, so everybody can see him, and the tradition still continues today.

Why Do They Watch and Listen to Yellow?

“You are Always Wearing Yellow”

It doesn’t matter what color you pick today.  If you’re going to lead, “You are Always Wearing Yellow”

And if you want to lead, that’s you! So, put on that yellow jersey and be the leader you were picked to be.

How Do You Look in Yellow?

Are you worried about your visibility or the image you project at work?

If so,my new book, “Must Be Present To Win” can help you!

You won’t learn this concept in business school. You may not even learn it later in management training or executive development courses. Oddly, the one “it” factor in leadership—being present, fully invested in the moment—is rarely taught.

Add my new book to your summer reading list.

Posted in Leadership and tagged Leaders Must Be Present To WIn, leadership, PresentToWIn, Self-Improvement 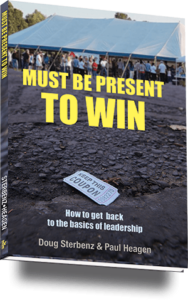